A Body Without A Head

A BODY WITHOUT A HEAD

A Body Without A Head | MySpace Video

"A Body without a Head," by poet, playwright and filmmaker George R. Carr, is a work of art-and a work of love. Carr's 18-minute video had its world premiere on October 5 at NewFilmmakers Fall Fest 2009, at the Anthology Film Archives in the East Village. I caught a showing on October 26, as part of the Soho House Screening Series, sponsored by SXM, in the old Meatpacking District.

Elements of "A Body without a Head" are George R. Carr's poetry, much of it abstract, most of it about love, and Tom Zuback's vivid black-and-white still photographs of a company of striking-looking individuals, usually in couples, sometimes in multiple images, in dance-like poses, thanks to choreographer Melissa Riker; in garb suggesting antiquity, thanks to costumers Kevin Carrigan, current Creative Director of ck Calvin Klein-and Calvin Klein himself; complemented by graceful, sensual drawings by Zack Carr III, the filmmaker's late brother-who had been Creative Director of Calvin Klein and designer of the Zack Carr Collection-and haunting music by Mark Nolan.

Movement in the film derives from the animation of Zack Carr III's works and from the camera moving across the images and from photo to photo, for which George R. Carr, working with lighting designer Drew Vanderburg, production designer Andrew Loren Resto, and editor and soundman Henry Steady merit credit.

Watch for future screenings of "A Body without a Head." Go to see it and you're in for a quite unique experience. 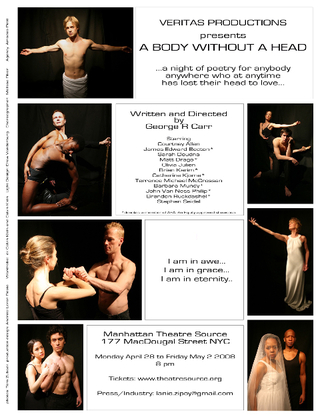 On the coast somewhere, twelve characters gather to reflect and express their experiences with love—the pain of loss, the sting of betrayal, and the joys of uniting. Inspired by an ancient story, George R. Carr's A Body Without a Head is a collection of poems adapted for the stage. The performance is a beautiful piece of expressionism dedicated to anyone who has ever lost their head to love.

The inspiration for George R. Carr's A Body Without a Head, a book of poetry that he has now adapted for the stage, is the ancient story of St. Torpez, who was beheaded by the Romans for converting. His body was placed in a box, which was placed into a boat and then set asea. The boat landed at a port called Heraclea. Upon opening the box, the inhabitants found the torso of Torpez to be as fresh as a living body. Seeing this miracle, the citizens also converted changed their city's name to St. Tropez.

A Body Without A Head is beautiful to watch. It is a performance about experience, not plot. The poems float by and what remains is the emotion of the characters, an emotion most people can relate to, though most would not have the wherewithal to express it so